The four best beaches in Spain

Fine sand or majestic rocks, crystal clear sea and breathtaking nature: here are the four best Spanish beaches! In its almost 8,000 kilometers of coastline, and with beautiful islands to enrich its natural heritage, Spain is confirmed as a destination of excellence for its crystal clear sea and beaches, which are truly unique and all different from each other, with dunes , cliffs, white sand, black sand, almost inaccessible coves and super busy coasts at any time of day or night.

Playa de las Catedrales in Galicia is undoubtedly one of the most beautiful places you can visit during your trip through the north of Spain. Cliffs sculpted by the wind and the sea like a film set, beautiful, forming a set of vaults and arches that almost resemble a temple. When the tide is low it is the best time to visit the beach and experience it to the fullest, perhaps taking a nice walk with your feet in the water. If the tide is high, however, do not venture: stop and watch the spectacle of impetuous nature. Playa de las Catedrales is a must see and absolutely worth your time, even if you have to stray away to see it. In the area there are endless beaches of fine white sand and usually moderate waves, which deserve to be visited, among which the beach of Augas Santas, popularly known as Playa de las Catedrales, a name that taken from the similarity that their rock formations they have Gothic cathedrals with flying buttresses. 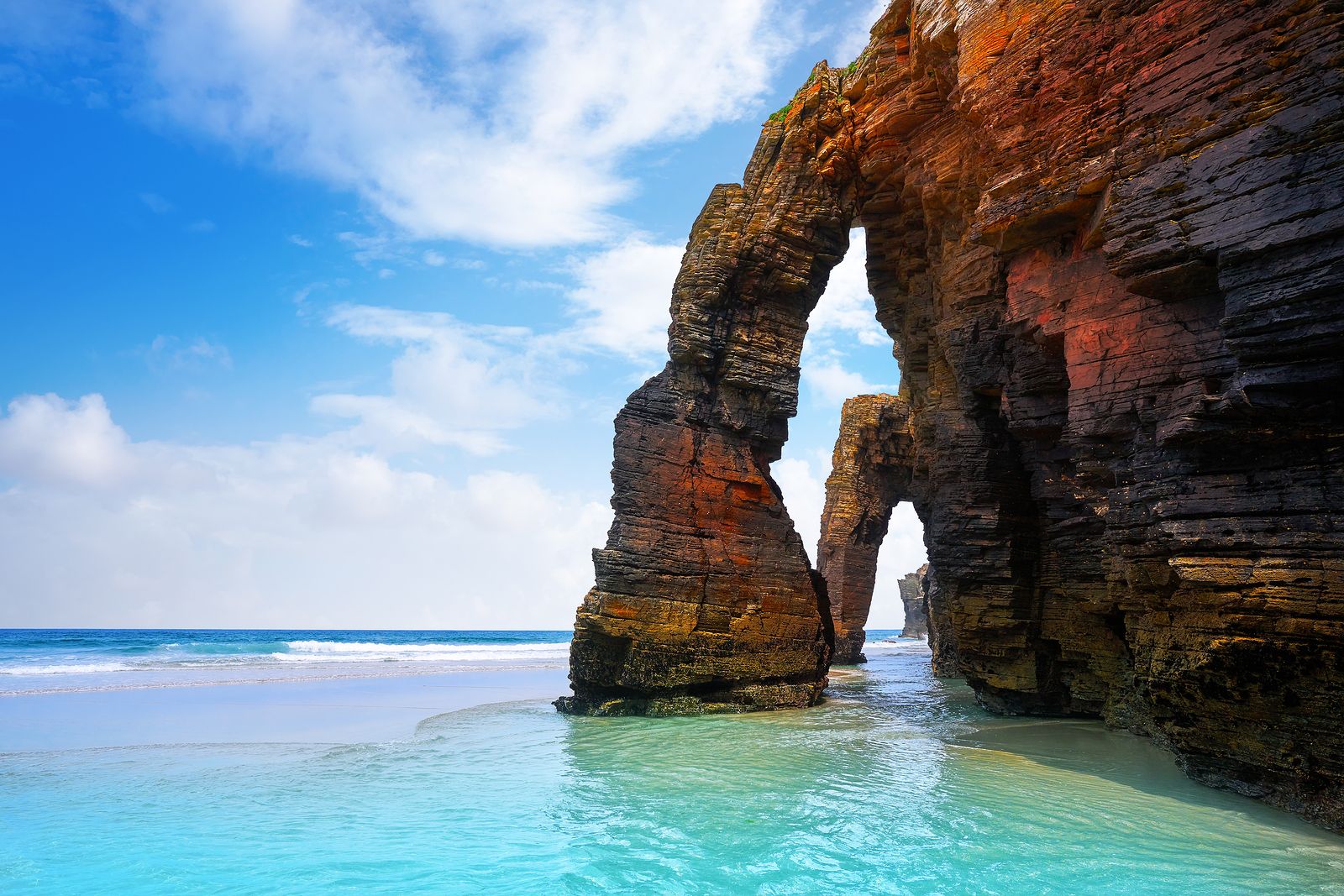 Small, indeed very small but highly suggestive, it is one of the most popular beaches in Menorca for tourists. We are talking about Cala Macarelleta, located about 14 kilometers from Ciutadella, between Castellet de Macarella and Cala Macarella, the larger of the two coves. Its name, in fact, refers to the small size and the name of the older sister, which is part of the Island’s Natural Area of ​​Special Interest. This is where the island’s nightlife is concentrated. Very popular with tourists in the evening, in Ciutadella there is no shortage of fish restaurants, outdoor cafes and above all the landing place for luxury boats, a destination for the most curious. Cala Macarelleta is the younger sister of another bay that is right next door, the Macarella. To see both, we suggest that you leave the car in either one and reach the other by swimming or walking. Here the water is turquoise and almost looks like a swimming pool, also because it is very calm and generally not very moving.

The incomparable La Concha beach is one of San Sebastián’s hallmarks. Located in the heart of the city, it offers the visitor the opportunity to enjoy magnificent views, such as that offered by its beautiful shell-shaped bay, with the island of Santa Clara in the center, flanked by the Urgull and Igeldo mountains. Contrary to what happens on most of the beaches and even those on this list, La Concha is a beach that perfectly and harmoniously blends the urban environment and nature. Of fine golden sand, in its 1,350 meters of length we can practice many sports, such as surfing, windsurfing, canoeing, bodyboarding, volleyball or beach soccer. It’s an alternative place for big days, a very urban beach vacation. It has several peaks, especially the right ones, highlighting El Pico del Loro at high tide, ideal for bodyboarding. 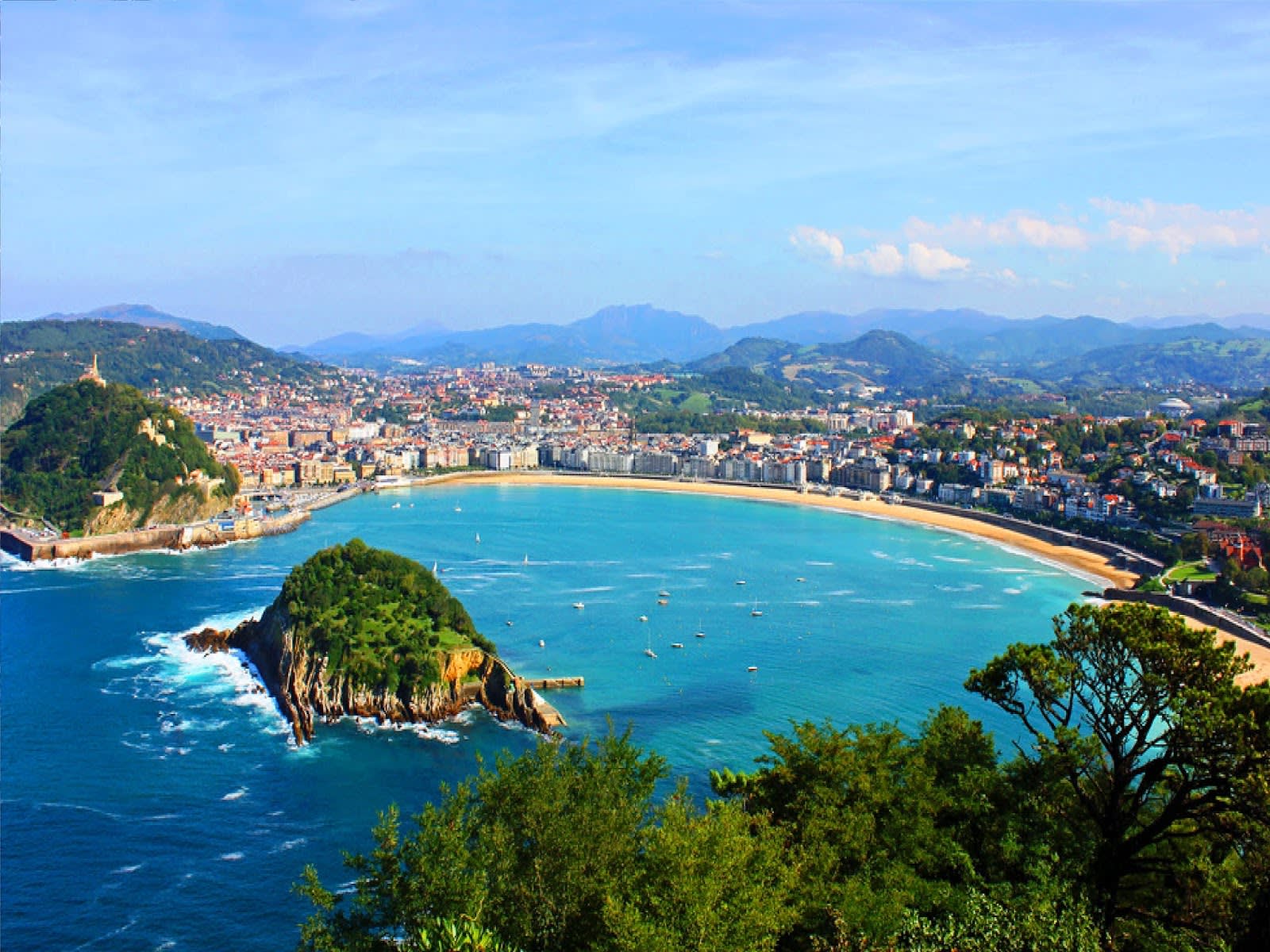 Bolonia, in Andalusia, is one of the most beautiful beaches in all of Spain with white sand and miles of paradise on earth. It is a small village on the Costa de la Luz, little known to Italians and Europeans in general, but is loved by Spanish families and young people. The playa di Bolonia is located exactly opposite the Moroccan city of Tanger, bordered by the woods of La Plata, that of Higueira and the hill of San Bartolomé. Bolonia’s fame does not stop only at the 4 km of golden beach, but also at the Roman ruins of the city of Baelo Claudia complete with a Roman theater and forum. In fact, the locality is one of the most important archaeological sites in all of Andalusia. All the ruins are in an excellent state of conservation, considering that the city of Baelo Claudia was founded in the beginning by the Phoenicians in the second century BC, it was an important seaport and point of connection with Africa. Reaching Bolonia is not complicated, you have to take the N340 heading towards Tarifa, then take the direction of the village “El Lentiscali”, which can only be reached via a panoramic road overlooking the bay of the Costa de La Luz. Journey time is approximately 3 hours from Seville and 2 hours from Malaga.