What to see in Tahiti

The name of Tahiti is often used to indicate the whole country. And this is explained by the fact that it is the largest island in French Polynesia, which is home to the capital of the area, Papeetee and the international airport. In short, the trip to Tahiti is for most everyone the beginning of the trip to Polynesia.

The island is extraordinarily beautiful with its white and black sand beaches. In reality, however, the island is not one but two: its eight shape is given by two islands joined by a narrow isthmus. The largest, Tahiti Nui, is where most of the towns and cities are located, Papeete, while the smaller ring, called Tahiti Iti, is quieter and sparsely populated, surrounded by cliffs that plunge towards the sea. The best white sand beaches on the island are located between Punaauia and Papara, but many visitors love the famous black sand beaches on the east coast, especially Pointe Venus. Tahiti is most famous for surfing as the waves can be gigantic here. And some spots are only suitable for very experienced surfers. Among the most famous beaches for riding the tables are Teahupo’o, Taapuna, which is located near Papeete and the black sand beach of Papara. 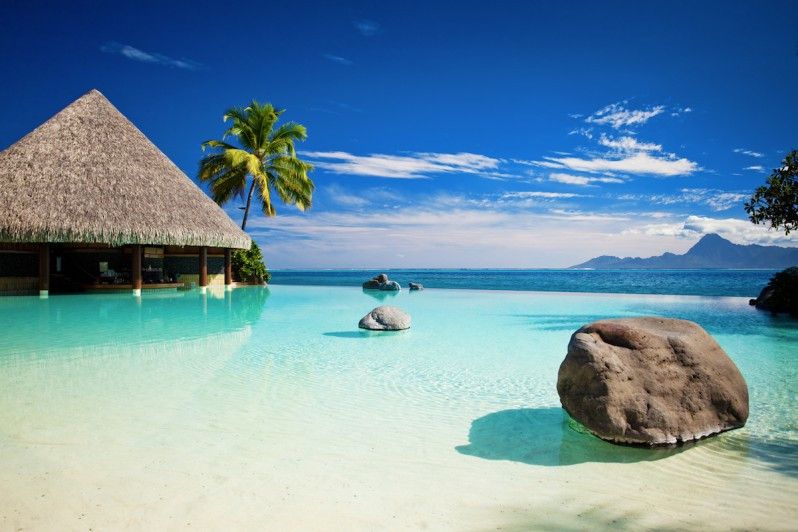 The Rangiroa atoll is a place that enters your soul: a gigantic ring of sand between sand, sea and palm trees that stretches for 80 km with nothing in between. It has a literally infinite lagoon, almost the opposite bank is not seen. The open sea is connected to the internal lagoon in two passes, Tiputa and Avatoru, where snorkeling enthusiasts will be in paradise thanks to the extraordinary fish fauna of pelagic fish, gray sharks, dolphins, carangidae, rays and manta rays. Rangiroa can be reached with an internal flight of about an hour that departs daily from Tahiti.

The largest of the Wind Islands, it is also a portal to the wildest nature paradise. Also beautiful is the Harrison W. Smith botanical garden, whose name pays homage to the American physicist who created it with hundreds of plants and flowers from all over the world. The Vaipahi gardens, also in Tahiti: There are 6 km of paths between tropical vegetation and majestic waterfalls, excellent excursion also for families with children, who can stop a bit in the picnic area by the sea and to whom the archaeological sites scattered along the way. If you want to go on an adventure and immerse yourself in the wildest and least known Tahiti, then there is the Teahupoo Tahiti Surfari to really discover the most remote places on the island, between flora and fauna. The seabed of Tahiti has been called “the richest aquariums in the world” by leading biologists and scientists for its extraordinary biodiversity. If you are a snorkeling or diving lover this will be like a paradise. In the turquoise and emerald green lagoons of the islands, a lot of fish swim accompanied by the colors of corals. Meanwhile, the turtles lay their eggs on wonderful deserted beaches. The panorama can also be admired from above by parasailing or flying over the islands by helicopter.

Polynesia has been declared a mammal sanctuary. Polynesia is certainly among the perfect places to watch whales and dolphins. Unlike other places in the world where you can meet these great cetaceans, in Polynesia you can enjoy a more intimate and respectful experience. Whales spend about 5 months a year in Polynesia to reproduce. They usually arrive in late July. Just in these days we have received news that whales have already arrived in Polynesia thanks to the higher than normal temperature. It is a unique experience that everyone should have the opportunity to live. The arrival of the whales is a very felt event for the Polynesians and the whales are said to come in conjunction with the flowering of the atae, also known as the whale tree. Whales and their offspring leave Polynesia in late October to migrate to the Antarctic waters where they feed.

Robert WAN, whose father left China for Tahiti in 1904, is a businessman who works at a crossroads of cultures. Although French, Polynesia remains its beloved homeland, while China reflects its origins. Its multicultural identity is a powerful source of energy. In 1974, Robert WAN traveled to Japan, the cradle of the cultured pearls industry, to meet Professor Sato, a well-known figure in the production of cultured pearls who had worked with the legendary Kokichi Mikimoto, a pioneer and father of commercial agriculture in the pearls. The black pearls of Tahiti are the only must.

Vibrant soul of vivid colors and intense perfumes, the Tahiti market is truly a great bazaar. The historical, cultural and social center of the most important city in Polynesia, Le Marché di Papeete lives every day from four in the morning until six in the evening. This is how it appears to me in its light-hearted lightness while after crossing it after entering the main entrance: it is only one block from the promenade walked first under the sun that takes your breath away and blurs the contours of the buildings. Here, however, the gaze sweeps clear and curious over the seven thousand square meters of the Tahiti market. Built on two floors, now more than 150 years old, it is still an unmissable place for both locals and travelers. Both recalled by this chirping of merchant voices who praise goods and rattle prices like nursery rhymes. At each stall, I struggle to resist the polite but pressing invitations of Le Marché di Papeete. Everything seduces at the Tahiti market, right from the entrance: fish and meat on the stalls mix diets and colors, creating a mix of smells that leads to temptation. To resist them, I go further and breathe the flowers that like the rainbow draw the stalls of their profile.