Tenerife has 350 km of beaches, several charming villages, a year-round spring climate and lush nature. It is therefore no wonder that every year it attracts millions of tourists looking for a warm and quiet place to spend the winter. The atmosphere seems to be suspended in time because the history of the indigenous peoples who have lived there for millennia still resonates here. The name of Tenerife derives directly from the language of the Guanches, the original inhabitants of the island who were then exterminated during the Colombian colonization. They called it the island of Tene Ife, which means “Snow Mountain”.

The beaches of Tenerife

We cannot talk about Tenerife without referring to its beaches and the sea; after all, they are the reason why 10 million people choose Tenerife and the other Canary Islands every year. There are 350 kilometers of all types of coastline in Tenerife. The most famous and popular on the island is Las Teresitas, which is only 7km from Santa Cruz, making it the perfect place to cool off while exploring the city. It is a beach about 1.5 km long and is made up of sand (4 million bags) brought from the Sahara desert. It is rich in palm trees and plants called “sea grapes”, which give it a Caribbean character; it has all the amenities and entertainment you would expect on one of the world’s most popular urban beaches.

La Orotava is one of the cities of Tenerife that is worth a visit, leaving beaches and sun for at least a day. The historical center of the city, Villa de Abajo and Villa de Arriba, are well preserved and very representative of the history and culture of the Canary Islands. La Orotava also takes its name from the wonderful valley of palms and banana trees that goes from Teide to the sea. A natural path of great beauty and charm, one of the favorite travel destinations in Tenerife. La Orotava is situated in a splendid position in a valley that starts from the sea and reaches the summit of Teide. The valley is shaped like a huge rectangle, 18km long and 8km wide, plunging from 2,000m into the sea. The great slope of the summit slopes further down until it flows into the sea, with a low rocky shoreline and beautiful beaches. To admire the valley you have to follow the road that starts just outside the town, go up 2,000 meters and then go down, stopping from time to time to admire one of the many panoramic views that open up.

Considered to be the most elegant building in the Canary archipelago and also one of the most representative of Spanish architecture, the Tenerife Auditorium is definitely worth a visit. Even those who do not like symphonic or chamber music (this is the home of the Orquesta Sinfonica de Tenerife) are in fact struck by the way in which the architect Santiago Calatrava has managed to combine the modernity of the lines with the respect for the Atlantic environment in which the structure is inserted. A sail-shaped white reinforced concrete building, topped by a dome shaped like a wave. In short, a futuristic work that lends prestige to the capital Santa Cruz and to the entire island, so much so that in a few years it has become one of the main tourist attractions in the area (the Auditorium was completed in 2003).

3,178 meters high; 18,990 hectares of land; about 4 million visitors a year; since 2007, inscribed on the UNESCO World Heritage List. A few significant numbers are enough to understand the importance of this national park. However, to admire its beauty, one must reach the summit (“Pico del Teide”) on foot or with a more practical cable car. Many people opt for a “mixed solution”, using the cable car to climb the mountain. However, it should be borne in mind that the weather variability can cause the sudden interruption of the service, putting hikers in danger. When it comes to things to see, you are spoiled for choice: from Roques de Garcia, the peaks of fossil lava which are about 2,000 meters high (the most famous is “Roque Cinchado”), to Pico Viejo (in Italian “Picco Antico”), the mountain responsible for the last eruption in 1798, up to the Teide Observatory, one of the best astrophysical centers in the world. Of course, the ascent to the summit must be carefully planned. The time of year you want to travel matters, but above all, your health matters. Although not the Himalayas, the air above 3,000 meters is in fact sparse, so you need to make sure you physically resist the reduced availability of oxygen.

Los Gigantes is another stop not to be missed during your holiday in Tenerife. It is a small tourist center (even if the constant development of buildings makes the countries of the west coast increasingly agglomerated), it is famous for the homonymous “Acantilados de Los Gigantes”, a complex of cliffs overlooking the sea of ​​varying heights between 300 and 600 meters. A suggestive naturalistic scenario that owes its popularity above all to diving. It is here, along the submerged base of the cliffs, where most of the best dives on the island take place. It is therefore no coincidence that the diving centers are different and all of excellent quality. In addition to diving, Los Gigantes is the base for whale watching excursions, as well as parking for taxis that run back and forth to Masca, a spectacular seaside village with a truly sleepy bay. If necessary, Playa De Masca can also be reached from the ground, but the journey is long (6 hours round trip) and not without obstacles. Therefore, taxis departing from Los Gigantes are an excellent alternative both for those who are not used to trekking and for those who, once they have reached the inlet by road, prefer to avoid the fatigue on returning. 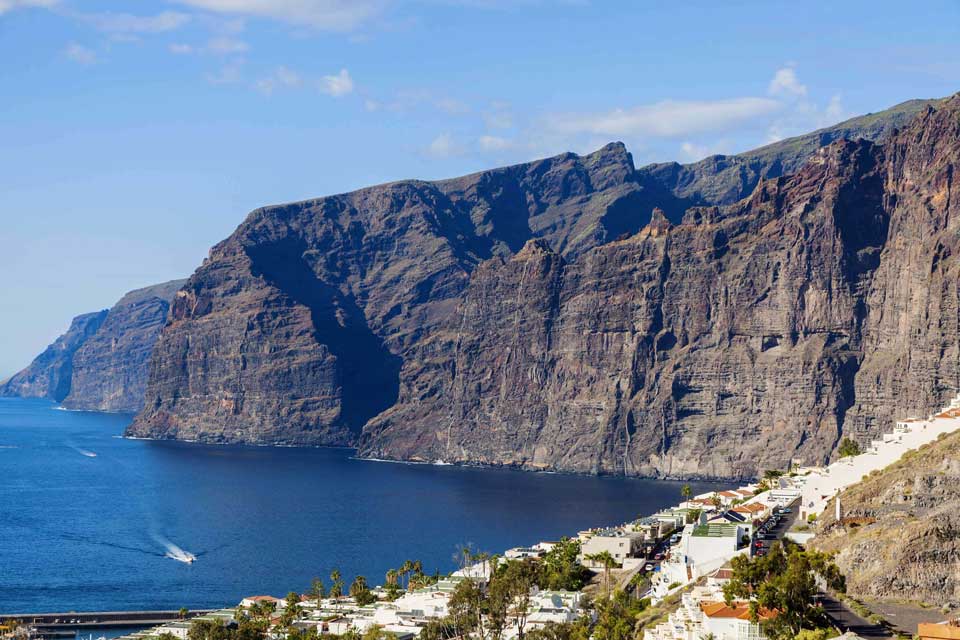 Another destination not to be missed on a trip to Tenerife is undoubtedly a visit to this wonderful place located in the highest part of the island. Established in 1954, it is the largest and oldest park in the Canary Islands, with an area of ​​almost 19,000 hectares. Teide, which gives the park its name, is an active volcano that has not erupted since 1909. At 3,718 meters, it is the highest peak in Spain. Thanks to the numerous lava flows that have occurred over the centuries, an extraordinary landscape has been formed in terms of shape and colors that leave you breathless. Walking along its paths you can admire more than 50 endemic plant species, a wonderful archaeological and faunal heritage consisting mainly of reptiles, birds and numerous invertebrates (over a thousand species). It is the most visited national park in Europe and one of the first in the world. In 2016 it was visited by over 4 million tourists who came here to admire Mount Teide, which is the third largest and most extensive volcanic structure on the planet, after Mauna loa and Mauna kea in Hawaii. Since 2007, this national park has been recognized as a UNESCO World Heritage Site. I recommend a guided tour of Mount Teide, which you can book online, choosing the one that suits you best. Don’t miss the evening trek under the stars in this beautiful park.