What to see and what to do in Bangkok

The splendid capital of Thailand and gateway to Asia, Bangkok is a fascinating metropolis of golden temples and hypermodern skyscrapers, a Sky Bar where you can enjoy a cocktail while admiring the skyline and traditional water markets, luxury limousines and tuk tuk to sneak through traffic jams. In Bangkok the future and the past are mixed in a single block: today we will take you to Thailand to discover the things to see and do in Bangkok.

Wat Pho Bangkok with a total area of ​​80,000 square meters consists of two separate sectors, separated by Chetuphon Road: the sacred area where the main religious structures of the complex are located and the area reserved for monks’ lodgings. Wat has over 1,000 Buddha images, most of which come from Sukhothai and Ayutthaya, ancient capitals. Wat Pho in Bangkok, also known as the Temple of the Reclining Buddha or Wat Phra Chetuphon as Thais know it, is famous for containing the largest Buddha image in all of Thailand and is one of the oldest temples in the Asian country. nearly 200 years. The figure of the Buddha that he holds inside is 26 meters wide and 15 meters high and is gold plated. It depicts the Buddha in Nirvana, his feet are 5 meters wide and there are engraved illustrations of his story. To enter the temple it is necessary to take off your shoes and it is advisable to take the coin mechanism at the entrance to use it in the temple and perform a lucky rite where 108 bronze coins can be left in urns placed along the walls of the temple. The Grand Palace of Bangkok, commonly known as the Grand Palace, is one of the tourist gems of the city. It is a building complex in the heart of Bangkok, and is probably the most visited site in Thailand. There is no traveler who has been to Bangkok and has not visited it at least once. The Grand Palace is a group of buildings located in the central Phra Nakhon district. Here, the revered Emerald Buddha sits on a throne in the extraordinary temple complex that surrounds it, shining beneath the golden vaults near the great Chao Phraya River. The encounter between Thai and Western architecture tells the essence of the Royal Palace. Looking at the river of people who visit him daily and remain fascinated by it, it seems that from these portals he still sees the king coming out of these portals with his family and servants behind him, only to realize that today this intense atmosphere lives on throughout the his soul leaving this place. for official functions only. The quiet serenity of this place is astounding: not even the screams of tourists can drown out the sweet hum of the small leaf-shaped bronze plates hanging from the roofs of the buildings.

Wat Arun or Temple of Dawn is one of the most famous temples in Thailand, located in the Bangkok Yai district is very close to the Chao Phraya River in Thonburi. It is one of the most iconic temples in Bangkok, not only for its very different architecture from the rest of the city’s Buddhist temples, but also for its proximity to the river, which makes it the subject of many photographs that have been taken for this seasons were in the city. Across the Chao Praya River, the great river that flows through Bangkok, is the impressive Wat Arun. From a distance it looks like a mirage, up close it is exciting: climb the steep steps of the Temple of Dawn for a priceless view of the city, between Khmer-style towers and towers. Come there in the evening: the Temple of Dawn, despite its name, gives its best at sunset. Rama II renamed this complex “Wat Arun Ratchatharam”. The final name came with Rama IV, which means “Wat Arun Ratchawanaram”. There is a magnificent Khmer-style tower 81.85 meters high, decorated with pieces of Chinese porcelain, and four smaller towers that rise around a larger “prang”. It is one of the iconic symbols of Bangkok in the world. Main attraction: It is believed that anyone who does a work of merit in this temple and pays homage to the main Buddha statue will have a wonderful and wonderful life as the rising sun. Jim Thompson House is a Bangkok house museum located in the Pathumwan district. It is a complex made up of several old Thai apartment buildings created by the American businessman Jim Thompson to assemble his art collection. Jim Thompson, a former US intelligence officer who became a prominent silk entrepreneur, was a Southeast Asian art collector. His collection consisted of statues, paintings and porcelain from Thailand, Burma, Cambodia and Laos. In 1958, he began building a house in a park overlooking a klong by buying and moving parts of six old 19th-century Thai houses in Bangkok, many of which came from Ayutthaya, the former capital of the kingdom of Thailand. Jim Thompson’s Silk House is the legacy of an American businessman who came to Thailand to work in the silk trade, during his stay in Bangkok he built six wooden houses which became his residence for 30 years. Jim Thompson was a Southeast Asian art and culture buff. The story begins in 1946 when Jim Thompson decides to move to Thailand to revive the Thai silk market, later used in some of the most important fashion houses in the world and on the catwalks such as London, Milan and New York.

Sirocco Sky Bar is the world’s “tallest” open-air restaurant and was unanimously voted one of the top 10 rooftop bars: Sirocco Sky Bar is one of Bangkok’s must-see spots. Located on the 63rd floor of the Lebua State Tower, this famous venue amazes its patrons with breathtaking views, an emblematic and spectacular dome and rare dishes prepared by some of Asia’s most eclectic chefs. An award that takes on even greater value given that in recent years few Thai restaurants have managed to achieve such a level of score and perfection. The ranking of the best restaurants in Thailand published by Thailand Tatler magazine has now become a tradition in the Asian country and is very much appreciated by the readers of the publication, by the international jet set and by the most well-known personalities of worldliness always looking for new culinary experiences. What is the view of Bangkok from the sixty-third floor? Dizziness! The legendary Lebua Sirocco and Moon Bar Vertigo serve exquisite cocktails while admiring the breathtaking view. Unlike Sirocco, Vertigo provides supportive clothing for those who don’t follow the dress code. Attention, they are closed in case of rain! 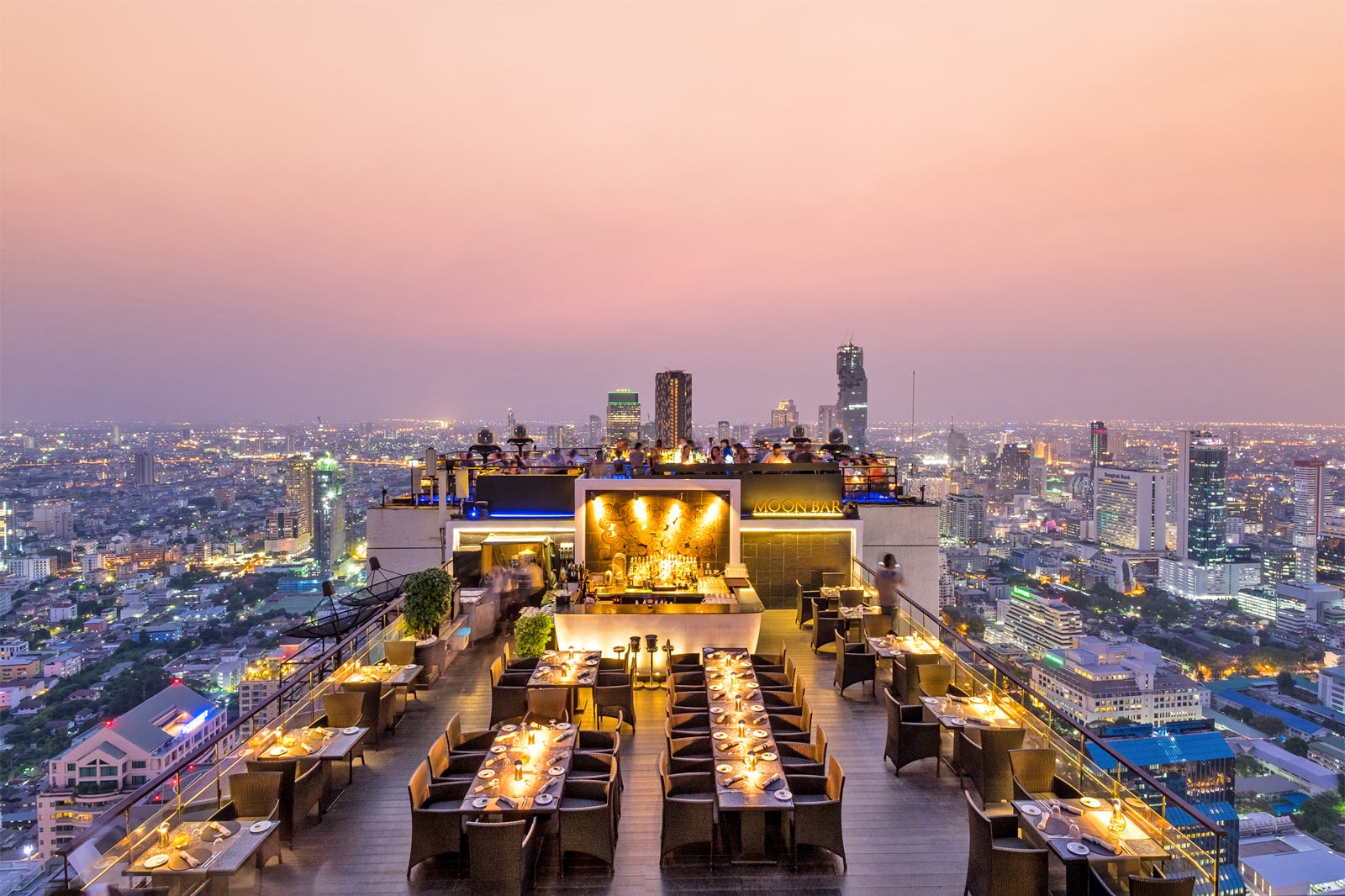