Top 6 things to see in Corfu

A holiday in Corfu is ideal if you want to immerse yourself in crystal clear waters, explore paradisiacal beaches and, at the same time, discover the past of this island. You will immediately notice the enchanting beauty of Corfu. Its charm emanates from the picturesque ancient center of the capital of the island characterized by elegant porticoed palaces in Venetian style, squares and paved alleys, from its white monasteries, from its Byzantine fortresses overlooking the sea, from its verdant panoramas full of olive trees . Then there are, of course, its dream beaches, sandy or rocky, all special, all different and all lapped by transparent waters, capable of containing all the shades of blue and green.

The main places of greatest artistic and cultural interest on the island are concentrated in this charming historic center, a UNESCO World Heritage Site, characterized by picturesque alleys, typical Greek taverns, a lively port and elegant arcaded palaces. It is here that the main aspects of its dominations are reflected: Byzantine, Venetian, English and French. Corfu Town is a very refined and elegant city that stands out from the typical cities of the Greek islands for its urban landscape characterized by the predominance of pastel yellow and pink colors and an atmosphere that closely resembles some Italian cities. Elegant palaces, flower-filled French-style squares, imposing fortresses, stately palaces and picturesque houses offer visitors a melange of beautiful images, to admire the splendor of Corfu. The city has a long history that wishes to be shared. 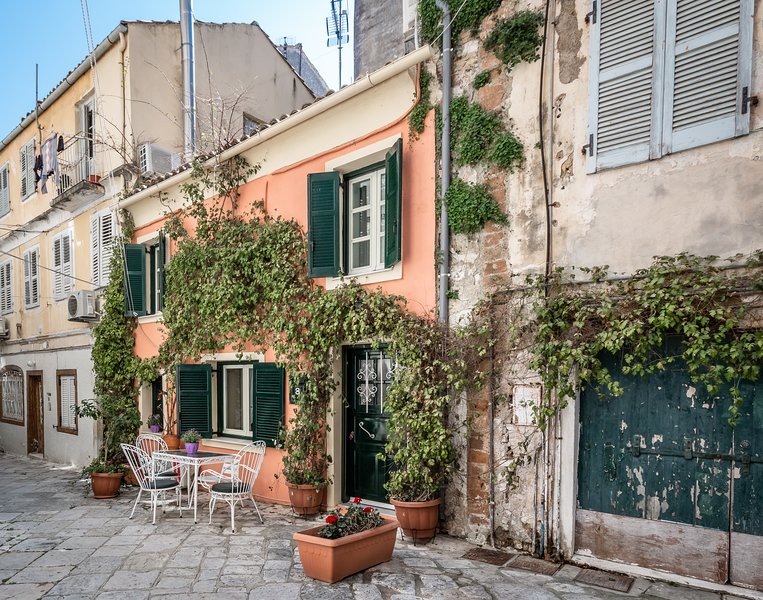 About 10 km from the old city of Corfu, in a hilly position, is the Achilleion Palace, better known as the palace of Sissi, as it is the splendid building that was built by Empress Elisabeth of Austria. The Achilleion was built by the Neapolitan architect Raffaele Caritto, renovating the villa of the Corfiot Petros Brailas-Armenis, often frequented by Sissi, and which was given to her after the owner’s death. The palace was designed, following Elisabetta’s instructions, in the Pompeian style. An oasis of peace where Elizabeth decided to spend the remaining time to cure herself of the depression and pain caused by the loss of her only son in 1889. The Empress Elizabeth was a cultur of “beauty” in its broadest sense and restore this palace because she loved Greece in all its nuances.

Another interesting vantage point on the island of Corfu is the fortress of Angelokastro,

located on the northwestern coast. It is a fortress built in the thirteenth century by Michael II of Epirus and today represents one of the most important Byzantine castles in Greece. Angelokastro fortress today offers a splendid panoramic view of the west and north coast of Corfu and is one of the most popular tourist attractions, although the path to the top is quite wild and winding. Built for defensive purposes, the fortress had to withstand numerous battles over the centuries to reach today. It appears for the first time in an official document in 1272 which certifies its conquest by the Angevins. But the discovery of two paleochristian marble slabs dating from the fifth to the seventh century shows that the area was already inhabited in the Byzantine era.

Paleokastritsa, or Palaiokastritsa, is one of the most enchanting places on the island of Corfu, where uncontaminated nature and the sea with crystal clear waters merge, creating what the Corfiots themselves define “the most beautiful place in the world”. The most interesting aspect of Paleokastritsa is that, during the day at sea, you can easily move from one beach to another, thus discovering even the most uncontaminated and wild places, traveling aboard the taxi-boats that depart from the port of Paleokastritsa and lead to the discovery of the most hidden destinations of the bay, passing under the caves and inside suggestive granite coves, before making a stop on the most beautiful beaches.In Paleokastritsa you will find all kinds of services: in addition to the numerous taverns, there are supermarkets, shops and many bars.

5-Sidari, the channel of love

Sidari is undoubtedly the most romantic place on the island of Corfu. What makes this place, essentially with a tourist vocation, fascinating is the Canale dell’Amore, or Canal d’Amour, a deep natural inlet that forms a series of bays and canals in the yellow-pink rock of the coast that represent some of the beaches most beautiful on the island. If you are planning your holidays in Corfu with your sweetheart, the Canal d Amour cannot be missing in your travel itinerary! It is located north of the island of Corfu, in the town of Sidari and, from it, it can be reached on foot. The Canal d Amour is made up of a series of bays that, in succession, generate this spectacle of rock and spab, reachable through natural steps carved into the rock.

Access is from Perulades, a small town of about 800 inhabitants. You have to go along a dirt road that leads to a panoramic point from which you can take wonderful photos, especially at sunset. Absolutely one of the most beautiful places to photograph in Corfu. Not to be missed! Drasti Beach is located 38 km from the center of Corfu. It could be classified, a quiet Sidari offers the wild beauty one encounters in Sidari, but in a much more relaxed pace. The peculiar shape of the territory makes this beach very special. The beach consists mainly of blue waters and sand. We recommend that you have the absolutely necessary as there are no tavernas nearby.