The most beautiful beaches on the Amalfi Coast

The beach of the Furore Fjord

The Fiordo di Furore beach has recently reopened after three years of closure. It is located a stone’s throw from Praiano, between the municipalities of Furore and Conca dei Marini and every year, on the first Sunday of July, a well-known diving competition is held. Extraordinary place takes us into a unique landscape and the small beach can be glimpsed from a bridge on the road in front of the uninhabited seaside village, From the highway there are stairs that lead to the beach but you have to park in Praiano and reach it with a shuttle and then go down many stairs. Furore beach is among the most characteristic and photographed places on the Amalfi Coast.

Much more particular is the Marina di Praia, which is part of Praiano and is a small beach full of pebbles with a Torre a Mare towering above it. From the beach of Praia with small boats you can reach the famous Grotta dellAfricana and del Suppraiano and also Cala di Gavitella which if you want can also be reached on foot, facing 413 steps from the Marina di Praia. The sun reaches Marina di Praia only in the central hours of the day.

The bay of Erchie

The bay of Erchie is a small fishing village between Maiori and Cetara with an extraordinary sea and white sand. It is a free beach surrounded by rocky walls and a thick Mediterranean scrub and the sun is only in the morning and disappears in the early afternoon. The wonderful beach of Erchie has crystal clear water and is surrounded by sheer walls; for this reason the Causo beach can only be reached by sea. Here the sun, unlike the Marina Grande beach of Amalfi, sets in the early afternoon.

About a kilometer from the large beach of Amalfi, coming from Vietri sul Mare, there is the Duoglio beach which can also be reached by boat from the Amalfi pier. Beautiful and clean waters at the Duoglio, among the best on the coast, which compete with the nearby Santa Croce beach, which can also be reached by sea or through the rocks. If you are looking for the cleanest sea on the Amalfi Coast, then here you are in the right place, the beach is mainly made of pebbles and is about 170 meters long. The beach is sunny until early afternoon. 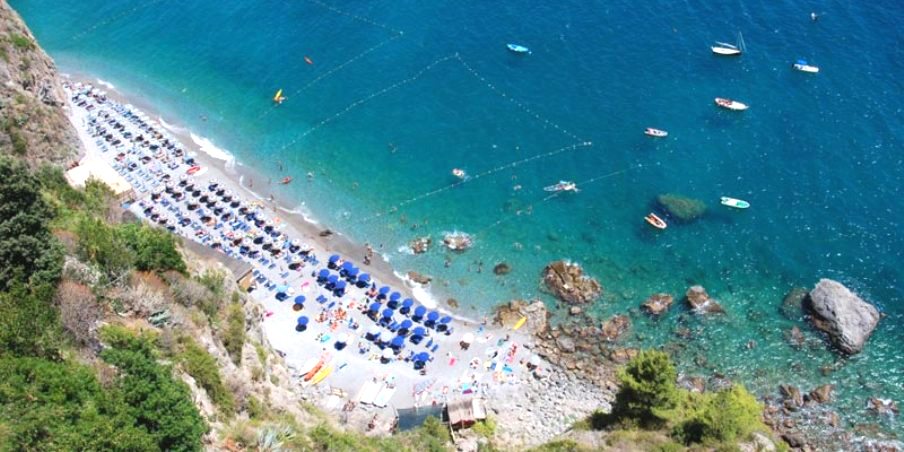 The Marina of Cetara

The beach of Marina di Cetara is the small town beach between the fishermen’s houses and the ancient tower and is the beach of the small village overlooking the sea. It is delightful and is the youngest beach on the coast: it was formed after the earthquake of the 80s and also has a bathhouse with clean seabed and the sun until late afternoon.

The Marina Grande beach is among the largest and given its central position it is also the most popular in the summer from June until September. From the pier of the largest beach in Amalfi boats leave to reach the many coves accessible only from the sea. Not recommended for those who do not like confusion and worldliness.

The Gavitella beach is located in Praiano, it is among the smallest beaches of the Amalfi Coast, in fact it is only thirty meters long and is made mainly of pebbles. To reach it, as for the other beaches of the Amalfi Coast, you have to go down some stairs, but once you get down, the effort will be rewarded by the fantastic view that will open in front of you towards Positano, the islands of Li Galli and Capri. It is one of the few places on the cliff where you can enjoy the sun until sunset.

Castiglione is the seaside village of the city of Ravello, and it is precisely here that there is a small and pretty sandy beach about one hundred meters long, surrounded on three sides by a steep cliff. At the center of the beach there is a bathing establishment, while on both sides access is free. Here the sun beats you until early afternoon. You can reach the beach of Castiglione in Ravello by following a staircase of 186 steps which starts from the SS Amalfitana, which is located just before the crossroads that climbs up to Ravello. The beach is easily accessible both by public transport, which stop right in front of the stairs, and by private transport, in this case you will have to stop the car in Atrani and then go back for about a kilometer, or park in Ravello for then go down the panoramic path that reaches up to Castiglione.

Visit https://hauteretreats.com/area/amalfi-coast/ for a selection of villas in the Amalfi Coast