Being a Christian holiday, December 25 is not a national holiday in Japan. So shops, schools and offices are open, but that doesn’t mean we’re not celebrating. Perhaps with some characteristics definitely out of the “canons” that we Westerners consider Christmas. Let’s start with the Christmas decorations: although it is not an “obligatory” party since November, Japanese cities are lit up with street lamps and Christmas trees. Everything lasts until December 25, then it goes to the attic, because the Epiphany has not yet decided to stop in Tokyo. There is no shortage of gifts, but with a significant difference. Your partner is the main character; more than a nativity scene, Christmas in Japan is a kind of early Valentine’s Day.

What do you eat at Christmas in Japan?

Christmas Cake
Perhaps due to the festive red and white colors, strawberry pancakes have become an unofficial Christmas Eve dessert in Japan, and many families will share it in the evening when everyone gets home from work. Typical Christmas sweets can be found in the supermarket and specialty bakeries and pastry shops will have their own version of this festive specialty.

Christmas Wagashi
Wagashi, a traditional Japanese dessert that is already known to change with the seasons, goes well with festive makeup. Japanese pastry chefs create wagashi and manjū in festive shapes such as reindeer, Santa Claus, holly leaves, puddings, and snowmen. However, the aromas inside will usually remain traditional, such as red beans, burdock root, and green tea, to name a few.

Yuzu
The yuzu season runs from mid-November to mid-January, which means that winter is the best time for these Japanese citrus fruits. Fortunately, those craving a dose of vitamin C won’t have to travel far to find it – from KitKat to yuzu to yōkan (agar cake) to iced tea to yuzu and yuzu-shaped cakes, you’ll find plenty of them. during the holiday season. 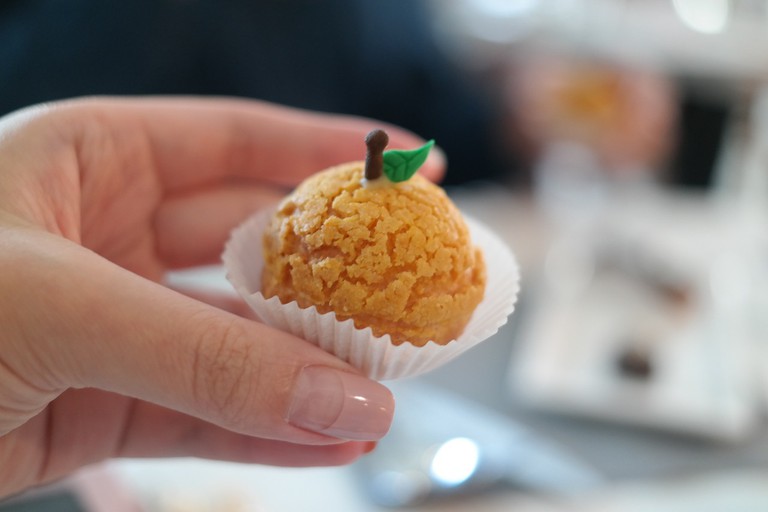 What does Japan do on Christmas eveninng?

The Japanese celebrate Christmas in their own unique way. Indeed, Christmas Eve may be the most important day in December for many. This is because Christmas Eve is the day lovers express their love, just like Valentine’s Day. In fact, it’s often classified as a Japanese Valentine’s Day and a day that many plan months in advance. Depending on the family, fruit pies are also eaten on Christmas Eve. I know what you are thinking. Think of those horrible fruit pies in America where most of them are thrown away or stale after being outdoors for so long. Fruit cakes in Japan are not quite the same as in the United States. The Japanese call these fruit cakes crisumasu keeki. Crisumasu keekis are really delicious. It usually consists of a sponge cake with whipped cream. The cake is usually decorated with fruits such as strawberries, oranges and peaches. It is so delicious! In fact, if you buy these cakes on Christmas day, you can get a discount on these cakes. Many candy shops are thrilled to get rid of these cakes and start the New Year with more treats. The cakes are sometimes packaged in pretty square boxes. They have an opening at the top where you can insert your fingers and carry the dough without fear of ruining the dough. Reminds me of those Happy Meal boxes at McDonalds.

What happens in Japan at Christmas?

Christmas has only been widely celebrated in Japan in the past few decades. It is not yet seen as a religious holiday or holiday because there are not many Christians in Japan. Various customs that came to Japan from the United States, such as sending and receiving Christmas postcards and gifts, are popular today. In Japan, Christmas is more known as a time to spread happiness than religious holidays. Christmas Eve is often celebrated more than Christmas. Christmas Eve is a romantic day when couples spend time together and exchange gifts. In many ways, it resembles Valentine’s Day celebrations in Britain and the United States. Young couples like to stroll, watch the Christmas lights and dine in a romantic restaurant – booking a table on Christmas Eve can be very difficult because it’s so popular! Christmas is not a national holiday in Japan. However, schools are often closed on Christmas Day. The emperor’s birthday is a national holiday on December 23, as is a New Year’s school holiday. So the holiday often starts around 11pm. However, most companies consider the 25th day as a “normal” business day.

The best places to experience Christmas in Japan

If you are planning to spend Christmas in Japan, there are many different places to consider. There is also a fantastic range of activities, from Christmas parties to skiing or thermal baths.

Tokyo
There is no place like the capital to spend Christmas in Japan. Although Tokyo is a great city to visit at any time of the year, there is a real buzz of expectation in the air in December. Many streets are fully decorated with Christmas lights, fancy decorations and illuminations, while throughout the city there are huge German-style Christmas markets where you can buy great food and mulled wine, as well as many other attractions and rides.

Tokyo Disneyland
A visit to Tokyo Disneyland is one of the most popular attractions in Japan during the Christmas season. The amusement park is one of the largest in the country and has been attracting tourists for years who want to experience its rides and see the magic of Disney. During the Christmas season, the amusement park transforms into a beautiful winter wonderland with all kinds of Christmas-themed rides and activities.

Hokkaido
Head north to Hokkaido to see a true winter wonderland. The northernmost island is cold in December, but you can enjoy the white Christmas season and even ski in many mountain resorts. Even the largest city, Sapporo, celebrates Christmas in style and you can expect Christmas markets and lots of lights and illuminations. What to see in Africa

What to see in Mexico

The best places to visit in the Philippines

What to see in Africa