Intense colors and aromas, bold combinations, unusual flavors: Thai cuisine is able to surprise and delight the traveler from the very first taste. Traveling in these places you will be able to approach a culinary tradition that, in its variety, reflects the differences between the regions of the nation and also the varied cultural influences to which it is subjected, Arab and Chinese above all.

In Thailand, nam taohu, a bowl of soy milk enriched with jelly and tapioca, is also used early in the day. Soy milk tastes great. Very simple as a dish but a good way to start the day.

Pad Thai is one of the best known Thai dishes. Perfect for lunch, pad thai consists of a bowl of stir-fried noodles with eggs, vegetables, tofu, meat or fish and peanut grains. It exists in a thousand variations, from the basic version to super-elaborated recipes with vegetables in various cooking methods. It is the most popular fried noodle dish in Thailand and includes elements characteristic of both Thai cuisine and Chinese cuisine. Pad Thai is a complete dish: spicy at the right point, Pad Thai will make you want to leave immediately. Pad Thai is the most representative dish of Thai cuisine, the one you will find in thousands of carts of spaghetti and street food vendors. 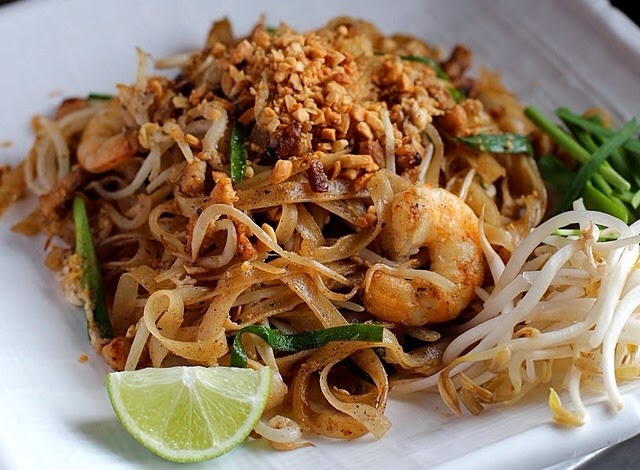 Som tam is a salad that is often prepared in street stalls, crushing papaya together with peanuts, shrimp, crab, fermented fish, tomato and chilli in a mortar. The taste is very strong and distinctive. If you are looking for an explosion of taste then you have found bread for your teeth, something very simple to make and that will make you take an exotic and tasty leap into the dark! Som Tam is a sour and spicy green papaya salad made using unripe papaya as the main ingredient. In the slightly mitigated version compared to the traditional one, the number of chillies is reduced, which usually vary from 3 to 4 for a dish. Usually Som Tam is accompanied by glutinous rice or sticky rice, in Thai caw niew.
It is a light and delicious lunch, perfect for a sultry summer day, and more.

If you are looking for strong and new flavors, for something that warms you up during the cold season and makes you rejoice in taste, here is the tom yam soup directly from Thailand. Tom yum soup, in particular, is prepared with coconut milk, shrimp, mushrooms, lime, lemongrass and the inevitable hot pepper. There are several variations of the shrimp tom yum and the two most common are the tom yum goong nam sai, which is the shrimp soup in clear broth, and the tom yum goong nam khon, which is the creamy version with unsweetened condensed milk. and with the addition of chilli sauce, which gives it not only greater spiciness but also a beautiful complexion. It is the most popular soup, probably the most popular recipe, in the country. You can’t walk into a restaurant without spotting Tom Yum on the menu.

Another soup, this time based on tomatoes, shrimps and mushrooms to which numerous aromatic herbs and a generous dose of chilli are added. Tom yam kung is served in a particular dish, with a hole in the center to accommodate a candle that keeps the dish warm. The most popular tom yam is shrimp, but mixed seafood and chicken could also be used. Tom yum kung, a Thai shrimp soup, is one of the most famous soups in the world. The flavor is complex and perfectly combines spicy, sweet and sour aromas. Using the ready-made tom yum mix, the dish is quicker and easier to prepare. An exquisite preparation that is part of traditional Thai cuisine, to which miraculous powers are even attributed due to the particular foods it contains.

Among the most popular specialties as a dessert we find the khao niao mamuang, which is prepared by boiling rice in sweetened coconut milk: the result is a kind of thick pudding. The original name of this dessert is Khao Niao Mamuang, literally sticky rice with mango, and the final result from an aesthetic point of view is very similar to our own rice pudding. The type of rice used for the preparation of this dessert is glutinous rice, sticky rice, grown mainly in South Asia and so called not because it contains gluten but because, once cooked, it is very sticky. This simple dessert is incredibly popular, and it can be found at virtually any eatery in Thailand.

Finally, if you love daring combinations, don’t miss the khanom mo kaeng, a creamy dessert prepared with eggs, flour, palm sugar and coconut milk and accompanied by fried onions. A real taste of the real Thailand, with its strong flavors and surprising contrasts! If you’ve never eaten a dessert with fried shallots, you may be worried. Eventually, your apprehension may be confirmed, and that’s okay. Take a small bite of the custard with some fried scallions to see if you like it. If you find yourself enjoying custard with fried shallot, you’ve just discovered a new combination of foods that some of us have been adoring for so long. Khanom mo keang is a traditional Thai dessert that is a bit of a cross between custard, flan and pie. It’s very sweet and soft, and it’s so good you can easily eat multiple servings in one sitting!